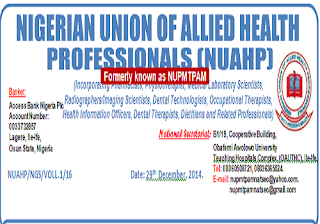 Health professionals in Delta state under the state chapter of the National Union of Allied Health Professionals, NUAHP, has accused the Permanent Secretary of the State Hospital Management Board, HMB, Dr. Caroline Ajuya of intimidation and plot  to undermines their ongoing industrial action.
According to the workers alleged that Dr. Ajuya has perfected plans to thwart the ongoing industrial action of the union in the state which commenced yesterday May 25th, 2015 through moves to hire services of technicians and non-professionals in order to reduce the effort of the striking professionals.

Addressing newsmen yesterday at the Ughelli Central Hospital, Mr Joseph Owholo, who is the state chairman of NUAHP said the permanent secretary deployed technicians and quarks who are not qualified to embark on jobs specified for scientists with a threat to sanction members of the executive at the end of the industrial action.
Owholo flanked by executive members of the association stated that: “On hearing the actions of Ajuya, I contacted her for clarifications as a member of the union, she insulted me and threatened to sanction the state NUAHP executive at the expiration of the strike.
However, when contacted on the development, Dr. Ajuya said she only directed staff were joining the strike yo handover government properties in their possession to other staff willing to work.
She said: “I never said I would sanction him but told him that I would discipline him if any of my instruments are destroyed as a result of their actions. If they are not working, they should allow my technicians work.”
Posted by Unknown at 16:05:00