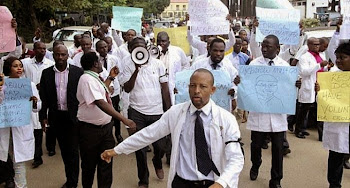 According to Channels News website, theboard chairman, Senator Onyeka Okoroafor told journalists after a board meeting that staff who were given queries can now resume their duties without any
interference.

Reacting to the privatization plans whichcaused serious uproar and protest by affected staff, he said it has been dropped.

He also said the allegations of gross misconduct and financial misappropriation leveled against the Chief Medical Director, Dr Angela Uwakwem are not enough to warrant her sack. Senator Okoroafor told the striking workers to return to work as the decisions of the board are for the best interest of all the staff.

The striking workers however have refused to return to work maintaining that the Medical Director must be removed before they would return.

Two Police patrol Hilux buses were seen
around the east wing of the administration complex last Friday as the workers took part in a peaceful demonstration around the hospital.