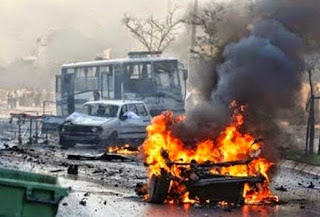 Yobe State Governor, Ibrahim Gaidam, has consoled the families of victims killed during a suicide bomb blast in the state capital.

This past weekend, a female suicide bomber detonated an Improvised Explosives Device (IED) in Damaturu killing several people at the entrance of the city's central motor park.


Gaidam has visited the Damaturu Specialist Hospital to sympathize with the victims of the blast.
He condemned the act and stressed that his administration would foot the medical bills of all the victims.

The governor directed the hospital authorities to speed up the treatments and to work out modalities for the referral cases for urgent medical attention.

Gaidam called on residents to be more vigilant and be ready to always assist security agents in the fight against terrorism as he pledged the support of his administration to fight terrorism.

The Medical Director of the Hospital, Dr Garba Musa Fika, confirmed 34 injured persons were brought to the hospital from the scene of the blast.

He explained that out of the 34, seven have been confirmed dead while 27 were being treated.
He also said among the 27 being treated, seven are critically injured and might be referred to either the Federal Medical Centre in Nguru in the state or Azare in the neighbouring Bauchi state.