Nigeria Health Workers Set for Nationwide Strike on May 17 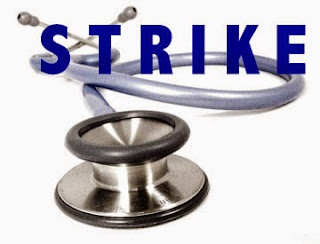 Three months after their last nationwide strike which lasted four months, the Nigerian Union of Allied Health Professionals again on Tuesday issued a seven-day ultimatum to the federal government to address its demands, failing which it would be left with no option than to commence another round of indefinite strike from May 17.

The last strike which commenced late 2014 was suspended on February 2, 2015, after a truce was
brokered between the union and the government. Curiously however, the union said their demands are still pending before the government, three months after it suspended the strike. The impending strike by the union which comprises all health workers in the government hospitals except doctors and nurses was arrived at at the end of the union’s sixth triennial national delegates’ conference held between May 5 and May 8, 2015 at the NLC Secretariat, Uyo, Akwa Ibom State.

Unveiling the union’s position to reporters at a press conference in Ibadan, the Oyo State capital, the newly elected president of the union, Obinna Ogbonna and the out-going president, Felix Faniran, said the health workers who were ready to continue to render services to teeming Nigerians got deceived by the government hence the need to resort to another round of strike action. Ogbonna said, “There will be a nationwide strike by our members if the government refuses to meet our demands. Part of the issues in contention since 2009 are the urgent need to release circular to implement an agreement on adjusted salaries of all health professionals as it is done for the Nigeria Medical Association members since January 2014.

We are also demanding the payment of arrears on skipping of CONHESS 10 since 2010 in compliance with a court judgement. “We are also demanding the promotion of our members who have spent 15 years on CONHESS 14 and designate the most senior ones as directors or heads of department. We want our members to be appointed Chief Medical Directors of various tertiary hospitals, rather than skewing the position in favour of medical practitioners only.

We want immediate circular from the government to seal the agreement reached in 2012 on the extension of retirement age from 60 to 65 or 70 years.” Also included in their demands are the need for the government to amend the extant circular for medical laboratory science interns to include post National Youth Service Corps placement on grade level 09.

Faniran in his remarks said the looming strike was meant to address the rights of the health workers, adding that, “We are not being insensitive in our demands; it is the workers’ rights we are demanding. If we go on strike, we will make arrangement for palliative measure so that patients will not suffer. It will be unethical to confront Gen. Muhammadu Buhari with strike. That is why Jonathan must address this before he goes, but if Buhari inherits it, we are certain that we can have a better audience with him,” he said

By:Ademola Babalola
This Day
Posted by Unknown at 19:24:00