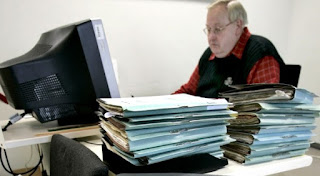 Prolonged sitting has been associated with higher mortality from all causes, as well as increased incidence of cancer, cardiovascular disease, and type 2 diabetes, even among people who exercise regularly. This is according to a meta-analysis published in the January 20 issue of the Annals of Internal Medicine.
However, analyzing 47 previous publications showed that the relationship between death from all causes and a sedentary lifestyle is more among people who don’t exercise at all.


A sedentary lifestyle involves a lifestyle of consistent daily inactivity or passiveness. Jobs that require staff to sit down a lot from beginning to close of work also promote sedentary lifestyles.
Aviroop Biswas, BSc, from the Institute of Health Policy, Management and Evaluation, University of Toronto, Ontario, Canada, and colleagues analyzed 14 studies on cardiovascular disease and diabetes, 14 studies on cancer, and 13 studies on all-cause mortality, all but three of which were prospective cohort designs. All but one of the studies used participant self-reporting to track sedentary time.
Sedentary lifestyle was linked to a hazard ratio (HR) for all-cause mortality of 1.240 in the meta-analysis (95% confidence interval [CI], 1.090 – 1.410). Further, sedentary behavior was associated with an increase in cardiovascular disease mortality (HR, 1.179; 95% CI, 1.106 – 1.257), cardiovascular disease incidence (HR, 1.143; 95% CI, 1.002 – 1.729), cancer mortality (HR, 1.173; 95% CI, 1.108 – 1.242), cancer incidence (HR, 1.130; 95% CI, 1.053 – 1.213), and type 2 diabetes incidence (HR, 1.910; 95% CI, 1.642 – 2.222).
The increased risk for all-cause mortality was most pronounced among people with lower levels of physical activity, the authors found. The relative risk for sedentary behavior for all-cause mortality among those with high levels of physical activity was 30% lower than for those with low levels of physical activity. The hazard ratio for those who exercised frequently was 1.16 (95% CI, 0.84 – 1.59) compared with a HR of 1.46 (95% CI, 1.22 – 1.75) for those who did not.
According to the authors, “The deleterious outcome effects associated with sedentary time generally decreased in magnitude among persons who participated in higher levels of physical activity compared with lower levels,”
This observation was first made in the 1950s, when researchers discovered a twofold increase in myocardial infarction among bus drivers in London, United Kingdom, compared with among bus conductors, evidence for the damage done by sedentary behavior has accumulated sharply in recent years, although the effect of exercise in a sedentary life is unsettled.
Earlier this month, a large European study published in the American Journal of Clinical Nutrition showed that inactivity contributed to twice as many deaths as obesity. In that study of 300,000 men and women, participants benefited from as little as 20 minutes of exercise daily, or a little more than 2 hours per week.
However, a study of 71,000 women aged 50 to 79 years published in the Journal of the American College of Cardiology found that low or moderate exercise levels failed to ameliorate the effect of sitting for long periods every day. Moderate exercise was defined as participating in 2 to 2.5 hours of exercise weekly. However, women who walked 7 hours each week or ran or jogged for 5 hours each week did not experience increased risk from an otherwise sedentary lifestyle, the study showed. The hazard ratio for cardiovascular events was calculated to be 1.02 per hour of time spent sitting each day (95% CI, 1.01 – 1.03).
Despite this findings, research about sedentary behavior still has not led to specific guidelines about how to best modify sitting practices said authors of an editorial that accompanied the recent Annals of Internal Medicine study.
“Although the scientific activity in this new field is considerable, our understanding of sedentary behavior as a risk factor for chronic disease and death remains rudimentary,” write Brigid M. Lynch, PhD, from the Cancer Epidemiology Centre, Cancer Council Victoria, Melbourne, Australia, and Neville Owen, PhD, from the Behavioral & Generational Change Program, Baker IDI Heart and Diabetes Institute, Melbourne. Most study conclusions are limited by the lack of uniform methods and reliance on self-reporting, the editorial authors write. As a result, “research findings do not yet allow precise identification of the duration of sedentary behavior that puts persons at risk for chronic disease,” the authors write.
They also noted that associations between sitting and chronic disease are “significant but weak,” yet the risk for sedentary behavior is unlikely to be uniform across population subgroups. The question they asked is, “Are there specific subgroups of the population, who may be characterized by demographic attributes, the nature of their work, their commuting patterns, indices of social disadvantage, or genetic profiles, for whom sedentary behavior is most hazardous?”
The editorialists however had a conclusion; “Understanding the mechanisms by which sedentary behavior increases risk for disease and the precise amounts of sitting that generate risk may enable us to more effectively characterize the most at-risk groups within the population. The potential for innovative approaches to reduce health risks of too much sitting, particularly for primary prevention, is considerable, but such approaches should be based on strong evidence. In this context, the new synthesis of evidence provided by Biswas and colleagues is most welcome.”
Ann Intern Med. 2015;162:123-132, 146-147.
Posted by Unknown at 17:07:00