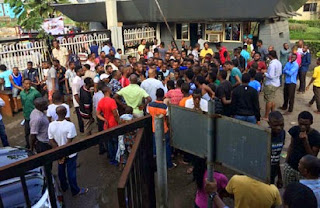 Pandemonium broke out in the early hours of Sunday, as medical students of the College of Medicine, Lagos University Teaching Hospital, CMUL/LUTH, went on rampage to protest the recurrent incidences of robbery attacks and other malicious attacks on the premises.

An eye witness disclosed  that yesterday’s incident was the fourth to be experienced in the last 10 months, and was sparked off in the wee hours following an attack unleashed by unknown persons on some students at one of the mosques located next to the outpatient department.


It was gathered that several of the students, under the auspices of the College of Medicine and Pharmaceutical Science Students Association, currently writing their exams, had gone to the mosque to study overnight due to power outage in the hostels and classrooms.
According to the source, the incident, which occurred around 2.30 am, took them by surprise.

“There were several of the students inside the mosque. When they noticed suspicious movement around the mosque, they raised alarm in view of unending incidents of robbery that had occurred in similar fashion within the hospital premises.

While this was happening, two students, one of them a 300 level Pharmacy undergraduate, ran to the hospital’s security post to inform them of the development, were alleged to have been apprehended.
“The students were mistaken to be the thieves and were forced to kneel down, and were severely brutalised. Both were injured and now in the hospital.”

Following the incident, there was confusion all over the place and in the process, the thieves who had raided the students in the mosque, escaped with the items that included laptops, handsets, Ipads and other valuables.

“When other students got wind of what happened to their colleagues, scores of the protesting students came out enmasse and marched towards the security post in anger.
The students also alleged that the security officers apart from brutalising the students, connived with the thieves to enable them escape.

“Subsequently, the students overpowered the security men and shut all the entry points into the hospital. The gates which were shut around 4am remained shut till 2pm.”
When visited the hospital a semblance of calm had returned and thestudents were seen gathered in groups discussing the incident.

Further efforts to talk to the injured students were rebuffed. They were said to be receiving treatment in one of the wards within the hospital.

As at the press time, there was no official statement from the hospital management regarding the incident and the Chief Medical Director could not be reached through the telephone.
Posted by Unknown at 18:34:00