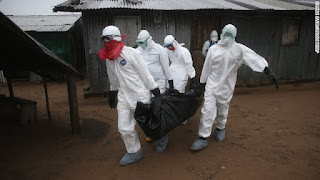 The global health system is unable to handle another mass epidemic like the Ebola outbreak in West Africa, Médecins Sans Frontières (MSF), a Medical Charity Organisation has said.
In a statement by the Thomson Reuters Foundation, the organisation founded by medical practitioners, urged wealthy nations to develop coordinated response plans and drugs to fight neglected diseases.


“Late and slow international response, the absence of solid leadership as well as the lack of treatments and vaccines are a recurrent scenario in many of today’s health emergencies and are not unique to the Ebola epidemic.

“If a global pandemic were to strike tomorrow, there is still no well-resourced, coordinated international response in place to kick in,’’ it quoted Joanne Liu, the international president of MSF as saying.

“The Ebola epidemic was detected in Guinea more than a year ago and spread to Liberia and Sierra Leone, killing more than 11,000 people.
“While Liberia was recently declared Ebola-free, a spike in new cases in Guinea has stoked concerns the virus could spread again,’’ the statement said.

It also urged the leaders of the upcoming G7 meeting to take action to close the “gaping hole in our global health system’’ to avert the risk of losing more thousands of lives to a new health emergency.
World leaders from Germany, the U.S., Britain, France, Canada, Italy and Japan will meet in Germany on June 7 and June 8, and are expected to discuss Ebola and neglected diseases among other issues.

According to the statement, MSF said that too little funding goes into the development of new drugs and vaccines for neglected diseases or those that have proven resistant to available treatments.
It also said that Dr Philipp Frisch of MSF said that “moreover, many of these medicines are priced out of reach.

“Millions of people suffer from diseases for which there are no effective drugs or vaccines because they don’t represent a lucrative market for the pharmaceutical industry.
“Drug-resistant tuberculosis (TB) is one of the health emergencies for which new drugs, vaccines and diagnostics are urgently needed.

“Wealthy, developed countries must take urgent action against the market failure in the pharmaceutical research and development.’’
The statement said the medical charity treated thousands of people each year for drug-resistant TB, while managing to cure only one in two.
It also said that some forms of the disease were no longer treatable due to resistance to existing drugs. (NAN)
Posted by Unknown at 16:37:00