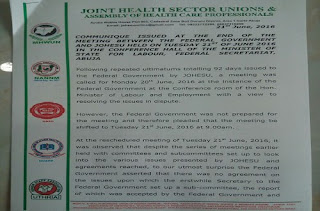 The Joint Health Sector Unions has directed its members to embark on a 7 day warning strike action after its meeting with the Federal Government ended in a deadlock.

In a letter dated 21st June and signed by its executives the body appealed for the general publics understanding, the body directed its members to proceed with its 7 day warning strike by 12 am Wednesday the 22nd of June 2016.


The letter reads: JOINT HEALTH SECTOR UNIONS & ASSEMBLY OF HEALTH CARE PROFESSIONALS A COMMUNIQUE ISSUED AT THE END OF THE MEETING BETWEEN THE FEDERAL GOVERNMENT AND JOHESU HELD ON TUESDAY 21st OF JUNE 2016 IN THE CONFERENCE HALL OF THE MINISTER OF STATE FOR LABOUR, FEDERAL SECRETARIAT, ABUJA
Following repeated ultimatums totalling 92 days issued to the Federal Government by JOHESU, a meeting was called for Monday 20th June, 2016 at the instance of the Federal Government at the Conference room of the Hon. Minister of Labour and Employment with a view to resolving the issues in dispute.

Other issues upon which previous submissions had been made were equally pushed to the unions to make fresh submission showing lack of seriousness on the part of the Federal Government.

Having consulted widely with members nationwide and having shown consistent understanding since February 2015, the leadership of JOHESU hereby directs that all members in Federal Tertiary Health Institutions should proceed on a 7-day WARNING STRIKE from 12.01am of Wednesday 22nd June, 2016.

We hereby appeal to the general public to please bear with us and impress it on the Federal Government to meet the demands of the unions to prevent the warning strike from becoming a full blown indefinite strike."

The statement concluded
Posted by Unknown at 10:19:00