#Fresh NSP REACTS TO THE RELEASE BY MRTB RECONCILIATORY COMMITTEE 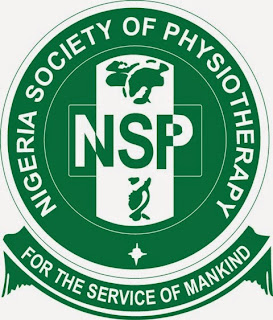 RE : MRTB RECONCILIATION MEETING.
The attention of Nigeria Society of Physiotherapy (NSP), the umbrella body of all Physiotherapists founded 1959 has been drawn to the release that does not represent the true position of NSP. The release was posted on official Medical Rehabilitation Therapists Board of Nigeria (MRTB) facebook page and is now being circulated on social media. The release titled "Reconciliation Committee sues for Lasting Peace amongst Conflicting Gladiators in the Physiotherapy Association" announcing a purported communique/outcome of the Reconciliation meeting held at the Conference room of MRTB, Yaba,Lagos on the 6th of September, 2017.
We wish to state that NSP, in accordance with our ideology, participated in the interest of peace and unity for our profession and also to respect the institution of MRTB and her leadership. We categorically want to state here that the release in circulation was not a true representation of the actual events at the meeting on that day BUT there was an agreement for peace to thrive and allow unity in the body of Physiotherapy in Nigeria which was the message to the meeting championed by NSP representatives led
by her president, Dr Ahmad Yusuf Rufai as against the unacceptable coalition option brought to the table by MRTB and aggrieved group. We also agreed to having a panel with three representatives each from both parties to help work out modalities for harmony and restoration of all physiotherapists in one professional body. At the end of the meeting, we did not deem it fit to agree to sign a resolution which we observed to have been written prior to commencement of the meeting.
There were ONLY two resolutions at the reconciliation meeting
1) Both groups agreed to work together towards one professional body of Physiotherapists.
2) Both groups also resolved to forward names of 3 members each to represent them on the proposed committee.
NSP leadership accepted to be part of future engagements with a view that harmony is possible if we continue to engage one another and all parties involved get committed to achieving it. The events of the day was viewed by our team as desired outcome in progress at the moment. However, attempt by the MRTB committee to insert the resolution
of their committee's meeting which did not form part of discussion during the reconciliation meeting was rebuffed by NSP delegation therefore, NSP didn't sign the Communique because some items on it were not part of the resolutions of the reconciliation meeting.
We were taken aback, yesterday, by the premature release of a communique and we wish to state thisaction is capable of truncating a peaceful resolution and unity we so much desire.

In line with our position at the Reconciliation meeting, we want to again state the following:
1) NSP or her representatives did not agree to any constitutional breach at her election in 2016 but rather a constitutional interpretational differences by the parties present at vetting.
a) Qualification of candidates was done in accordance with the constitution of NSP considering individual's registration/ membership status with NSP
b) Constitutional procedures were duely followed and the election of NSP officers as ratified by AGM was credible
c) Vetting procedure was done with the involvement of the representatives of the candidates and candidates were cleared in accordance with the requirements of the constitution only.
2) There was no time at the Kaduna election in 2016 that there was poor supervision by key officers responsible for strict adherence to constitutional application on election
3) List of delegates per state was available on the day of election and state chapter executives had access to clarify list with the finance team of the then NSP executives
4) The decision to boycott election by some candidate, on their own, was no way a ground by anyone to invalidate or undermine the election process and the result.
5) Kaduna State branch of NSP duely won the right to host 56th Conference of NSP and election was conducted at the Conference venue and never in an atmosphere hostile to smooth and fair election.
However, it can only be said that all candidates equally experienced normal tension usually associated with conduct of elections at this level
6) The role of the immediate past Secretary of NSP, Dr Olaniyi Oladire (PT) who coordinated vetting process with the involvement of the representatives of the candidates was in order and did not in any way breach NSP constitution or invalidate election process.
7) NSP attended the reconciliation meeting called by the Registrar of MRTB only because our leadership recognised the fact that no sacrifice was be too much for reconciliation and we decided to be part despite the overt obvious fact with us that nearly all the appointed reconciliation committee members are open supporters of Professor Rufus Adedoyin.

We would like to emphasize that as a mother we are willing to continue with the peace process if the corrections are effected and whatever be the final outcome of the MRTB conciliation committee must be submitted to a full house of d AGM of the NSP which elected Dr Rufai and his team.

In light of the above statements of fact against earlier circulated misrepresentation and subsequent disaffection being caused by the unfortunate release, we wish to again restate NSP's commitment to a peaceful resolution of the issues emanating from her 2016 election in Kaduna and an early integration of all parties involved in accordance with the wishes of our living founding father, Dr T.A Abayomi Oshin, other elders who before now recommended oneness and our peace coexistence as solutions for rapid growth and development of Physiotherapy in Nigeria.